Meet the experienced and friendly doctors and staff who make Family Vision Clinic the leading provider of vision care products and services in South Mississippi. 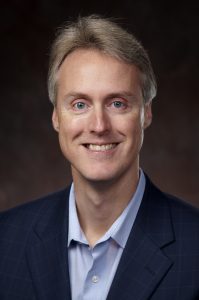 Dr. Reed has been a leader in his community and his profession. He is Past President of the Magee Chamber of Commerce, the Magee Lion’s Club, the Mississippi Optometric Association and the Southwest Optometric Society. He has served as chair of the Stewardship Committee at Goodwater Baptist Church and as an active deacon. Dr. Reed has also been active on a regional and national level, having served as a Trustee for SECO International, Chair of the Board of Trustees at Southern College of Optometry, a multiyear member of the American Optometric Association’s (AOA) Communications/Public Affairs Committee, Mississippi’s National Keyperson Coordinator in Advocacy and a multiyear delegate to the AOA Congress. Currently, Dr. Reed serves as a Trustee for the American Optometric Association.

Dr. Reed and his wife Kendra have an active interest in history and preservation. They own McRaven Tour Home in Vicksburg, MS, labeled as the “Time Capsule of the South” by National Geographic. McRaven is also the most haunted house in Mississippi. 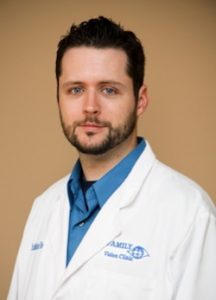 He is currently a member of the American Optometric Association (AOA) and the Mississippi Optometric Association (MOA). He currently serves on the Visual Rehabilitation and Sports Vision committee, organized under the MOA. He was a four-year member of Beta Sigma Kappa optometric honor fraternity while attending Southern College of Optometry and a member of Alpha Epsilon Delta Pre-Med Honor Society at Southern Miss. Dr. Reed currently practices primary care optometry with a special emphasis on pediatrics, ocular disease, neuro-optometric rehabilitation and sports vision therapy.

Dr. Reed enjoys spending time with his family and traveling. He is married to Andrea Reed and has four children, Lila, Vada, Livia and Vianna. 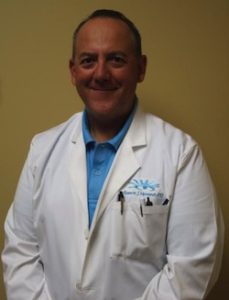 From there he joined the United States Navy where he was commissioned as a Lieutenant. He served in the medical service corp from 1989 to 1996 stationed in Newport Rhode Island, Jacksonville Florida, and Meridian Mississippi.

Loving Mississippi and wanting to stay he joined Southern Eye Center in 1996 and worked there until 2003 when he decided to open his own private practice in Petal. Moreno Eye Care has been serving the community with quality eye care and personal service for the last decade. In addition to building Moreno Eye Care, Dr. Moreno also has a clinic at South Mississippi Correctional Institute.

Dr. Moreno is married to Patricia who is a registered nurse and together they have five children; Paul, Jon, Monica, Mariana, and Cecilia. Any given weekend Dr. Moreno can be found coaching youth soccer, enjoying water sports, or grilling BBQ with the family. 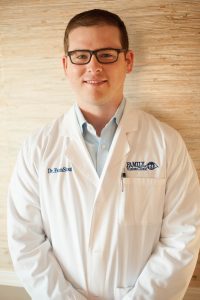 Dr. Stout graduated with honors from the University of Southern Mississippi in 2007 with a Bachelor of Science degree in psychology and a minor in chemistry. From there, he went on to attend the University of Alabama at Birmingham School of Optometry (UABSO), graduating with honors and earning his Doctor of Optometry (O.D.) degree in 2012. While at UABSO, Dr. Stout was a three year member of the Beta Sigma Kappa Optometric Honor Society. He was also selected as a recipient of the U.S. Army’s HPSP scholarship for health professionals.

After graduating optometry school, Dr. Stout accepted an active duty commission as a Captain in the U.S. Army. While on active duty, he served as an optometrist at Bayne-Jones Army Community Hospital in Fort Polk, LA, where he cared for active duty soldiers, retirees, and their dependents. Having served his active duty commitment, Dr. Stout returned to his native south Mississippi and joined Family Vision Clinic in July 2015, where he subsequently helped to open new clinic locations in Collins and Prentiss. Dr. Stout also currently serves as an optometrist in the U.S. Army Reserves, assigned to 7242nd Medical Support Unit in Gulfport.

Dr. Stout is an active member of the community. In addition to his involvement in the Mississippi and American Optometric Associations, he is also an active member and supporter of the Covington County Chamber of Commerce, Okatoma Civitan Club, and Civitan International.

When he is not involved in patient care, Dr. Stout can usually be found spending time with his wife, Kristi, and children, Judah and Layla. He enjoys most sports, playing guitar, and traveling with his family. 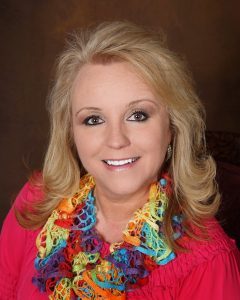 Beverly has been a member of the Family Vision Clinic team since September 2005 and currently serves as the Office Manager. Since joining Dr. Reed she has earned the degree of Certified Paraoptometric Technician (CPOT), the highest level possible in the American Optometric Association’s certification process. She serves as the Outreach Director coordinating Family Vision Clinic’s involvement in health fairs, school screenings and other community events.

You can schedule your next appointment with us online!